The call pops up on my phone when I’m in the laundry room trying to get just one.thing.done. I can tell, from the numbers on the screen, it’s the school and immediately know I’ve forgotten something else.

“Hey honey,” I answer. “Hi Mommy. Um, all my friends are talking about a pool party after school and, well…” she stammers, “I’m just really confused.”

“I’m sorry. I’ll drop your suit and towel off. No worries.” Meanwhile I think, Great.Just one more item on a long list of to-dos that are threatening to sink me.

I appreciated–officially–only the preschool teachers. Didn’t even do the other seven. SEVEN between the older kids.

I drift from activity to activity seeking a lifeboat to latch onto. “Are you feeling it too?,” I ask the other moms at the preschool party. I’m desperate to know I’m not the only one who feels like she’s drowning.

“Yeah. May,” they respond, but otherwise I wouldn’t know they’re struggling because they look so bright and shiny on the outside.

Bright and shiny is not how I currently feel.

It’s felt hard to get out of bed in the mornings. I’m so far behind that crossing a few things off the list won’t make a dent in what’s left to be done, so why even bother setting an alarm? An extra hour of sleep feels more important than sitting quietly in the dark. Necessary even.

And here’s a tip I hope to remember next year: May requires serious cash money. The gifts, the parties, the fines for overdue library books.

One more thing I’m failing at. I can’t even make it to the ATM.

But I press on: drive the van, attend various and sundry events, assume the role of Mystery Reader for the preschool class. 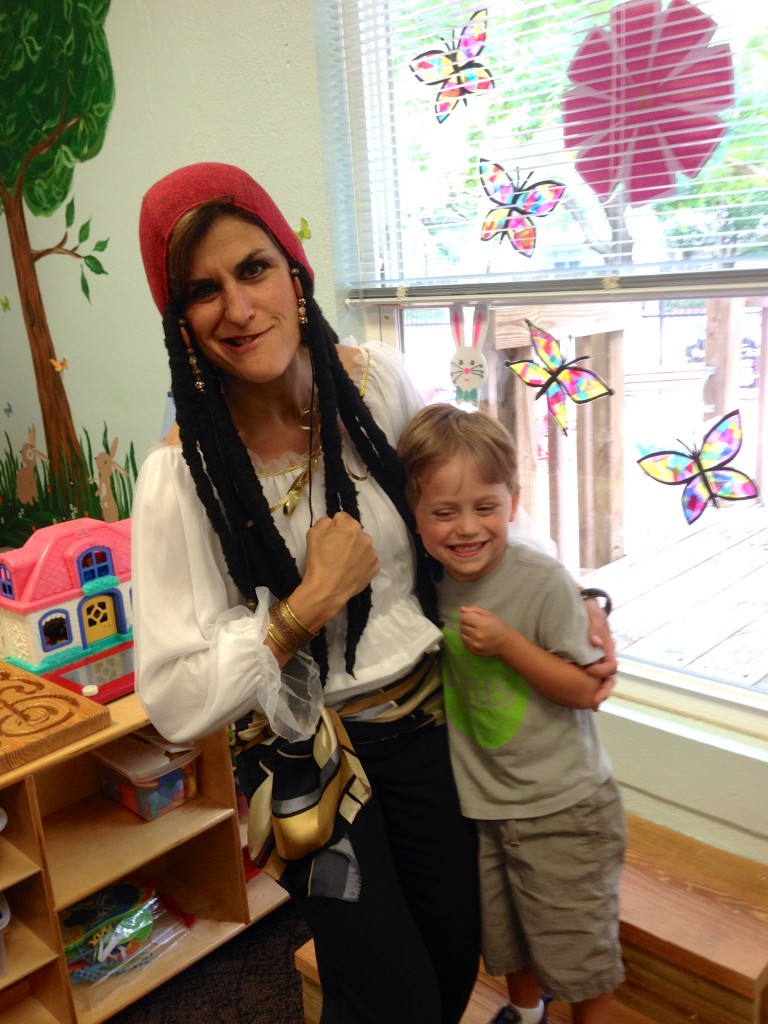 Bless it. I can’t even get my pirate expression right. It looks more like that of Scooby-Doo’s. 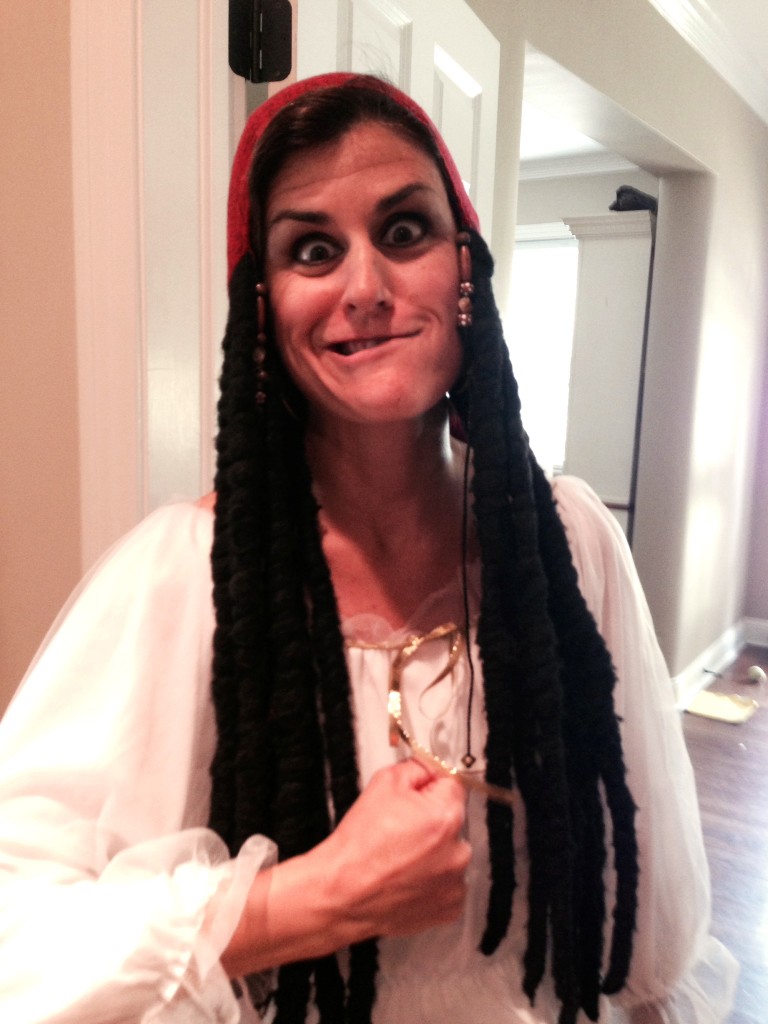 I’ve just barely wrapped up the Easter egg hunts, before I find myself attending an insane amount of field trips.

I observe alligators and read their corresponding placards in order to assist kids with the Trivia Scavenger Hunt handout which will earn them an (exciting!) reward, such as a bean in a jar and/or a free homework pass. (Are we really still dealing with homework in May?!) But come to find out, the teachers don’t even remember making that promise.

Are you telling me that instead of seeking the answer to, In which continent’s streams can the slender-snouted crocodile can be found?, I could’ve been lamenting to my favorite field-trip buddy, Clair, about my trouble to keep my head above water? Maybe even conducted an impromptu healing prayer service with some other moms in the bathroom at The Alligator Farm?

Who cares if it’s not technically a continent? Couldn’t we have just put China in most of the answer blanks since our federal government seems to think they’re the answer to all our problems anyway?

Next up is an (insightful!) tour of the St. Augustine fort and I’m surprised to learn a battle was never lost here–an achievement which seems impossible at the current moment as I contemplate my own pervasive feeling of defeat. The air is so thick with irony I could cut it with a knife.

And, speaking of knives, I (am privileged to!) listen to a white-haired lady with a freakishly-raspy voice describe, in great detail, the process used in ye olden days of amputating the limbs of wounded soldiers. Flesh scraping and all. Not to mention her vial of beetle blood with which she proceeds to ruin red M&Ms for the duration of my life. And for an entire busload of schoolchildren…

(Clair steps away, completely abandoning me during this particular segment).

And–Oh! I almost forgot–I (should be amazed to!) drink from the actual Fountain of Youth although, since then, my rapidly-graying hair and continued inability to eat anything but salads without gaining weight give me no reason whatsoever to believe it worked. 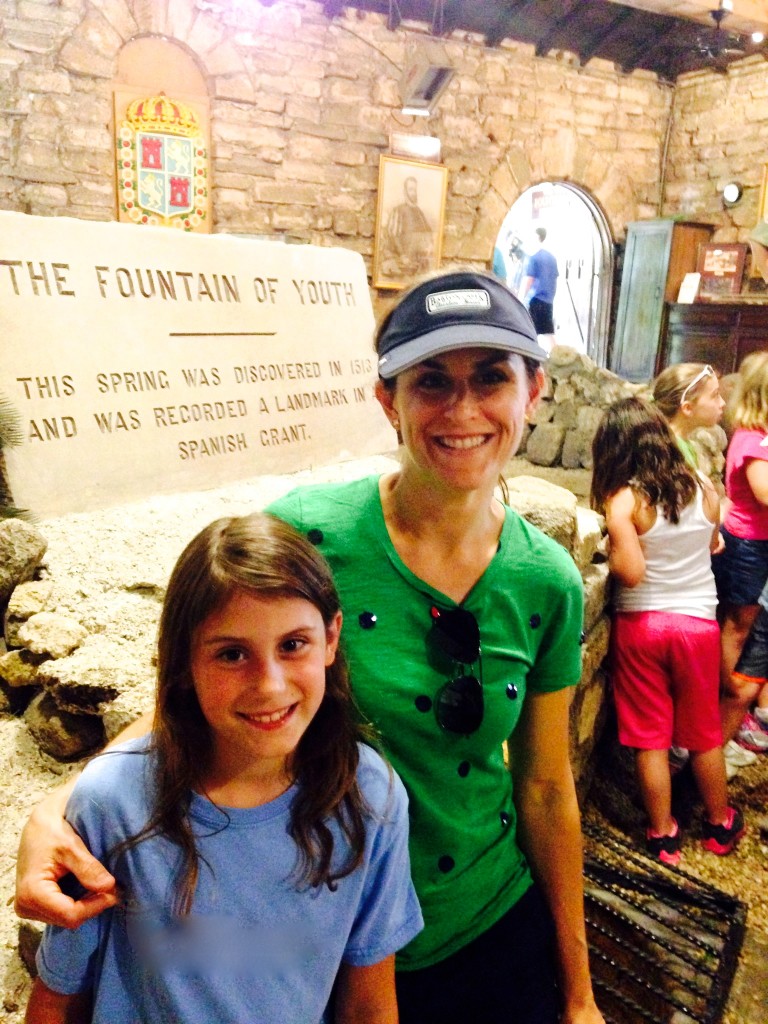 Clair sends another picture she took of us with the caption, “Watch out for the Indians behind you!” (Thankfully the loins belong to mannequins, otherwise I’d be drowning in a sea named “May” and being chased by wild Indians.) 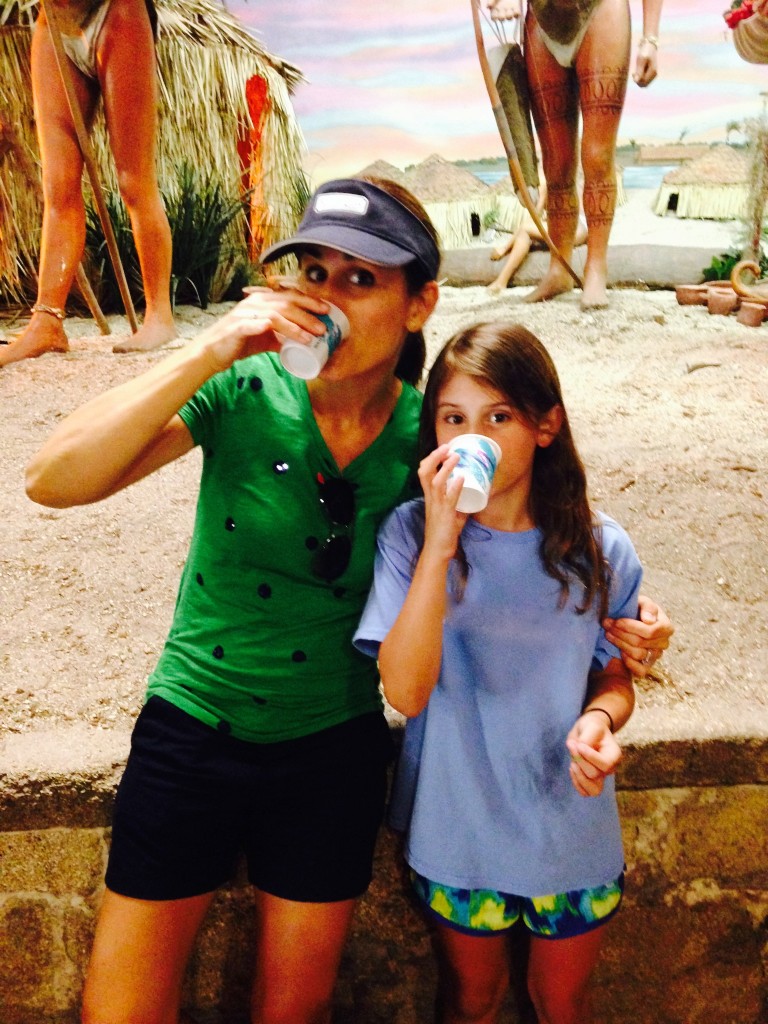 But the really sad part? This is all good stuff. The thanking and the celebrating and the making memories but, honestly, I fear I’ll be swept away in the flurry of commitments and sentimental moments. What I really feel like doing is climbing up to the nearest highpoint and shouting,

Perhaps, with all our modern technology and such, this term isn’t as much anymore for sea captains with angry icebergs as it is for weary mamas who’ve found themselves run aground on the month of May.

Thinking back to the most fulfilling times in my relationship with God, they’ve always gone hand-in-hand with when I’ve been most desperate for Him. If I’m honest–lately–I’ve lost some of my desperation for Him.

Two days in a row my alarm sounds early–loud and bright with good intentions–but Jon’s nighttime coughing is just the excuse I need to keep hitting Snooze until it’s too late. The third day turns out to be the charm as I make it up early enough to sip coffee under the moon and catch the simultaneous sounds of the crickets winding down and the songbirds tuning up.

It’s glorious. My soul needs this.

Drastic times call for drastic measures and my five-minute slot with Jesus Calling and a bible verse ain’t coming close to cuttin’ it lately. I need more. An infilling of the Lord’s Spirit; not a barrage of frenzied activity and a bandaid the next morning.

Could this be what Jesus meant when he said Mary chose the better part?

It seems counter-intuitive that less sleep could equate to a more rested feeling. It doesn’t compute for the mathematician in me, but that’s how it seems in this upside-down kingdom in which He reigns. It’s perfectly nonsensical and, frankly, I need more stuff I can’t explain.

So I go to bed praying He’ll give me the rest I need before the bell tolls and–if not that–the resolve not to hit Snooze anyway, because here’s the thing: no amount of crisp bills in diverse denominations, strong coffee, or well-intentioned alarm clocks can save me now. It’s the person and presence of Jesus alone and–finally, I admit–I desperately want to be with him.

And just when I think I can’t go on, that my strength has failed me, and I can tread water no longer, He comes and finds me where I am: unconscious and barely breathing, having washed up on dry land. He hugs me to his chest, breathes fresh air into deflated lungs, and lifts me off shifting sand in order to lay me down on the life preserver that is his Father.

And, for once, I let him float beside me, gently guiding me through high and stormy seas–the milieu, madness and mania–the absolute mayhem that is the month of May.

Share this to help get the word out to all the May-weary mamas. We need to know we’re not alone! Solidarity.

But that's enough about me…what about you?

Care to share some of your own moments of May-hem?

That Time I Was an Idiot
Not My Finest Parenting