The Good, The Bad & The Smelly

For those of you who are sick and tired of hearing about this, I UNDERSTAND. And I’m pretty sure I’m breaking all sorts of rules by even telling you I’m fasting, but the only way I know how to deal with traumatic events is to process out loud.

If you’re just joining in: I’m a non-faster who enjoys wine, sugar and bacon (not typically in that order, but I’m open), who is currently fasting. We’re nearing the end so I’m more like on the pro-level now so I should be able to provide even more compelling observations.

Firstly, based on multiple conversations via text, phone call and over dinner with friends, I’ve decided it should be re-titled. Instead of The Daniel Fast, a more fitting name would be Daniel’s Gas: A 21-day Tour.

Land o’ mine. Dorothy, we’re not in Kansas anymore. 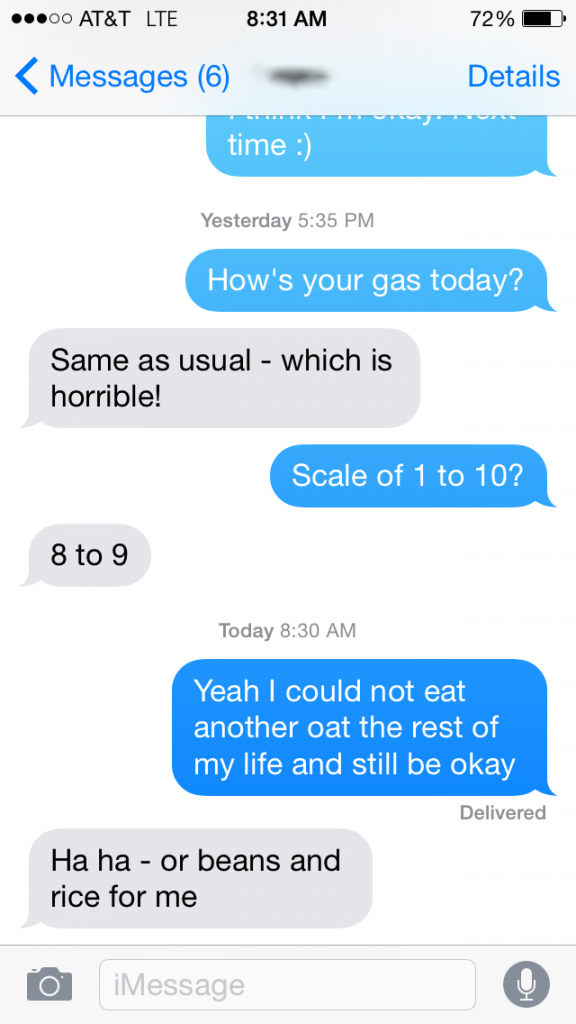 I became especially concerned recently, when a different friend was visiting church, that I would scare her away for good. Thankfully, I had what could only properly be called a subconscious stroke of genius when I saved her the aisle seat because it provided her with an emergency exit should the need arise. And, oh, how it rose. By the end of the service, instead of focusing on God and His majesty like we’d been asked, it was all I could do to pray that the–how shall I put it?–little blessings of Daniel I’ve been experiencing wouldn’t interrupt her experience of the Lord during that final song.

I know God loves me and promises to never leave or forsake me but even I do not want to be around me right now.

Dad, I’m sure you’ve curled into the fetal position under your desk by now, but what can I say? A girl can only go so long eating foods which would barely sustain a rabbit and coming up different ways to assemble peanut butter and bananas before her conversational topics sink to the lowest common denominator.

I have to admit, I’m a little ashamed that my chief concerns going into this thing were drinking coffee black and forgoing eggs at breakfast. Eggs, oh eggs, my precious lovelies, with your happy yokes and glistening white surrounds. You inspire poetry.

Jon and I were so hungry this past weekend we finally succeeded–after eighteen years of marriage–in biting each other’s heads off. I’m not sure this is what Daniel intended when he threw his hat into the ring for cookbook material but thank goodness for Kristen Feola’s cookbook, otherwise, we’d be eating tree bark all up in here.

That said, would I do it again? Yes. Why? Because the Lord is WORTH IT and obeying Him when He lays it on my heart to participate in our church’s annual fast matters.

It’s been a great reminder of what I already knew deep-down: life isn’t about me and summoning all my creature comforts to surround me in circle formation and sing We Are Family while fanning me with palm branches. Instead, all of creation exists to reflect His glory and the Bible says that if we don’t, then the rocks will do it for us.

His majesty will not go unannounced.

Also, I’ve noticed an unexpected by-product after detoxing from sugar et. al.: I’ve withdrawn from junk TV and sleeping in and replaced them with getting up early to spend time with the Lord. To my surprise, I awoke this morning feeling expectancy instead of dread because what first produced dread has become my new norm as I’ve been stripped and brought back-to-basics.

That’s not to say I don’t look forward to breaking the fast tomorrow. 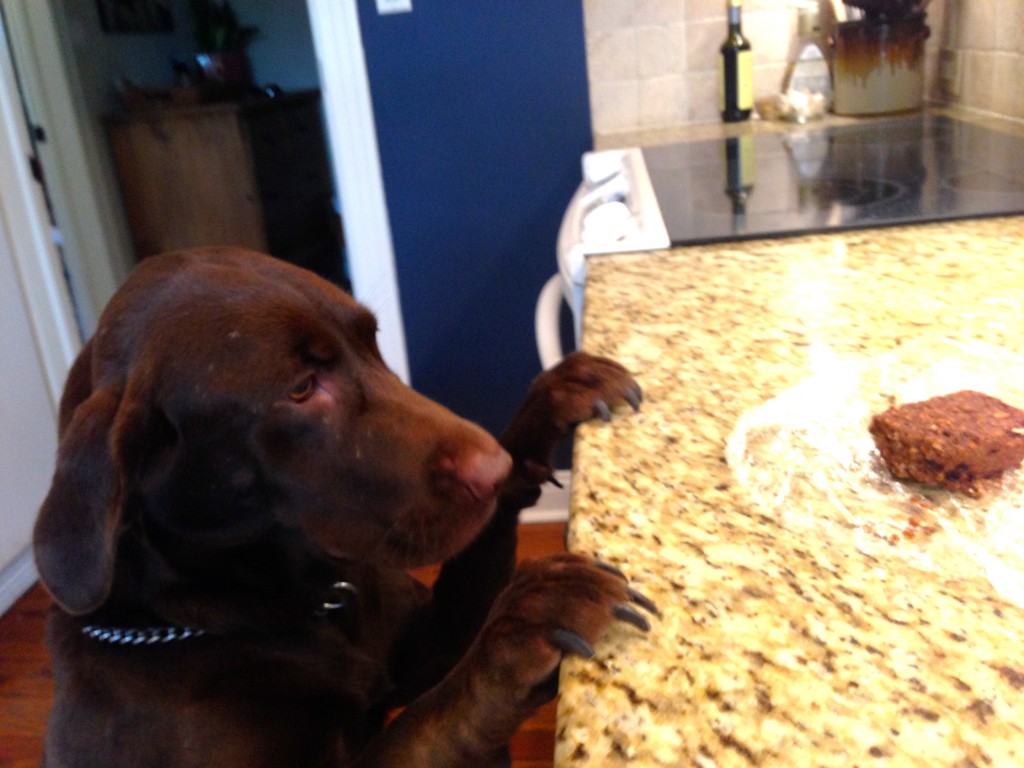 Even Lucy, who eats everything not tied down or hidden under the floorboards, rejected the so-called brownies. 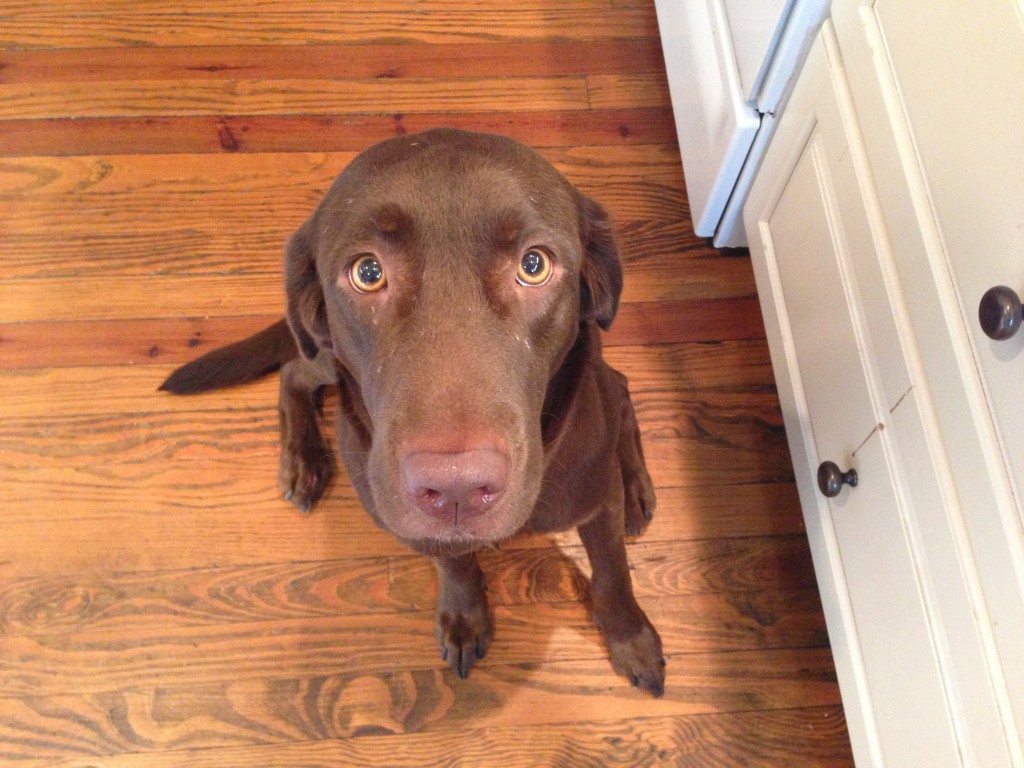 I know. Too cute. Some time I’ll tell you her story but, for now, breaking news: There’s only so much you can do with oats and, trust me, successfully making a brownie out of them without eggs and flour is not one of them.

p.s. See that big drip on the cabinetry? I feel certain it’s some form of black beans.

Insulating yourself with treats may feel good for a while but it certainly doesn’t provide the lasting pleasure, comfort and joy which comes from knowing that the same God who spoke the stars into the sky, naming them one by one, and calling the galaxies Milky Way, Kit Kat and so on, knows the number of hairs on your head, what you think in the dark and what you say to your kids when you’re at your worst, yet loves and pursues you and rejoices over you anyway.

Now THAT’S amazing. Something I can really sink my teeth into.

If you missed it, No Crutches is the prequel to this post.
And, if you’ve got the time, watch this for KitKat diagrams.

The Nooks and Crannies
No Crutches