Last night I had an unexpected date. I think the pockets that open up at the last minute in an otherwise dry and dusty calendar may be the ones which bloom greenest.

Things have been a little strained lately.

And by strained I mean I’ve been even more impatient than usual with some forgetfulness belonging to one of the two of us and her tendency to get off-track. And since I’ve been on a sharply-focused route to production, the one couldn’t be me. No time for stops on this train, baby. Only full-steam ahead.

But, as it turns out, hunger is an even more powerful force than a steel locomotive so when we stopped after the game to grab some take-out, I said, “You wanna eat here instead?” 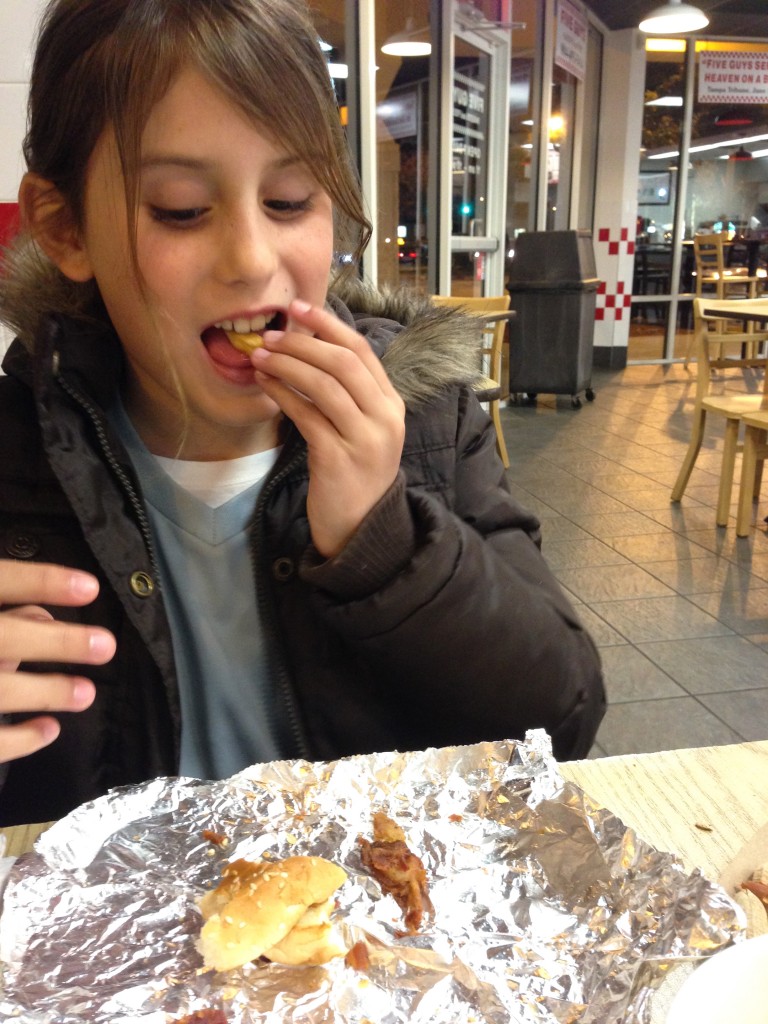 Never mind it was a school night and never mind she’d be out past bedtime. Sometimes a burger and heavily-salted fries are just what a girl with her girl needs. 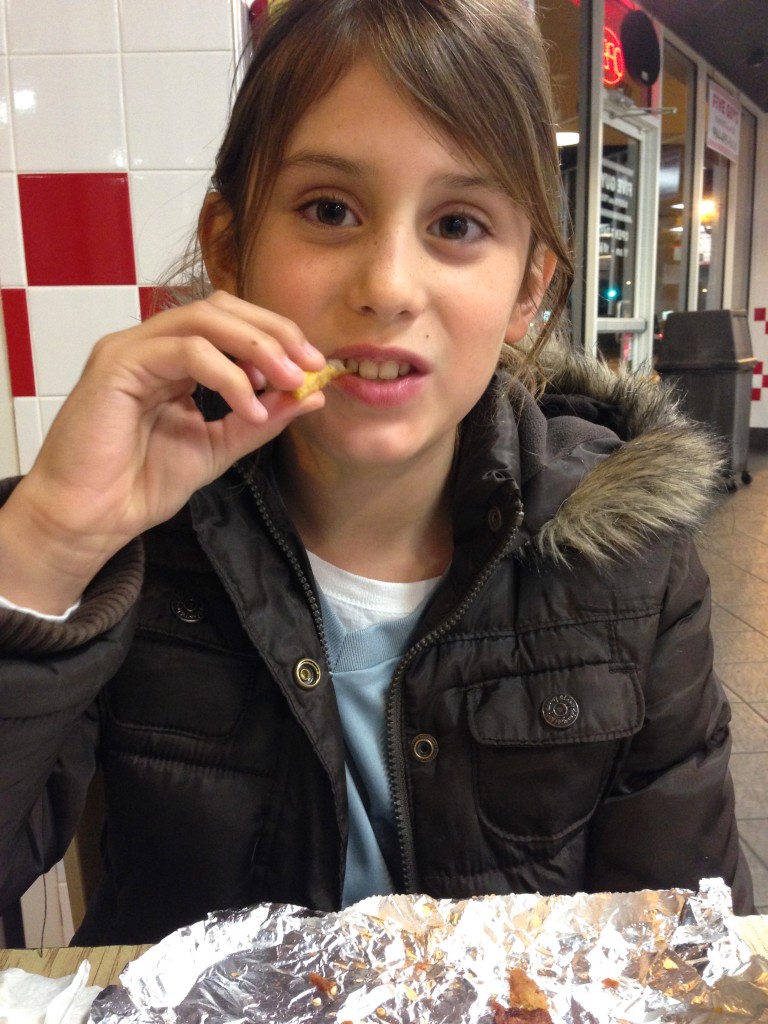 I noticed a new energy about her all at once. Whether it was the soccer, the cold, or the chance to eat ketchup alongside other more substantial items, I don’t know. Maybe she liked having me all to herself. 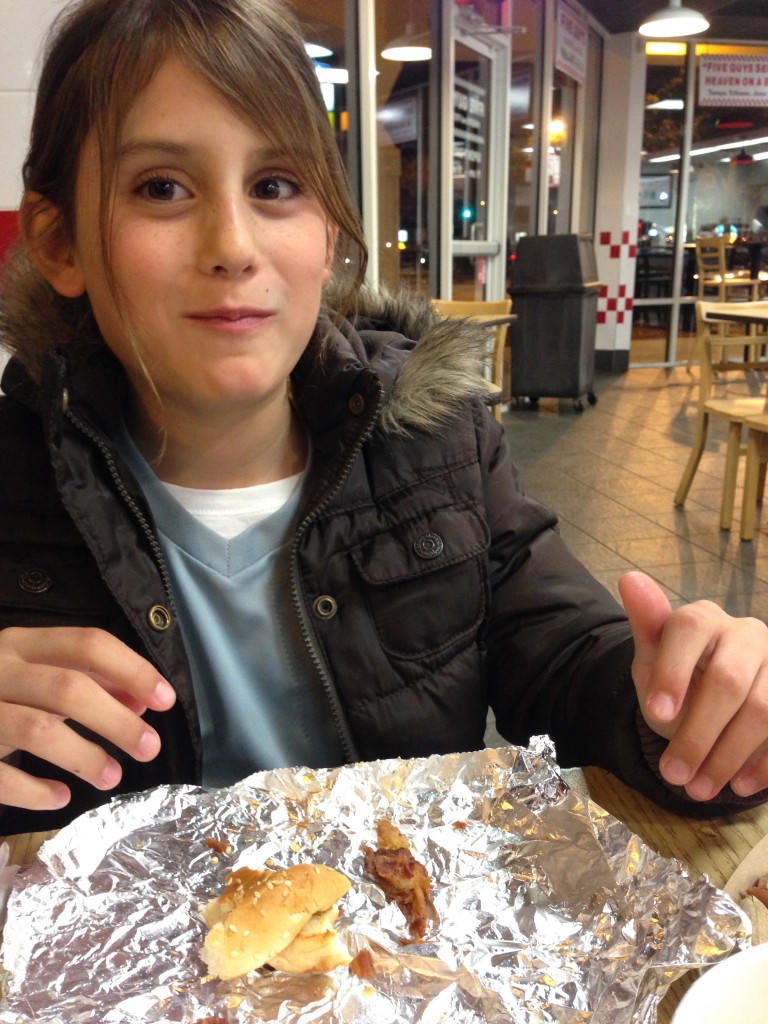 “You’re gorgeous”, I said as she poked a slender piece of potato into her mouth. She flashed a Where’d that come from? look but didn’t let it keep her from the task at hand. They were spontaneous words blurted out without thought or ulterior motive. Not because she needed puffing up, but the next day I would remember and be glad for them, realizing their true value. She needs the unabashed compliments mixed in among the “Do you realize that’s the third thing you’ve lost this week?” jabs. 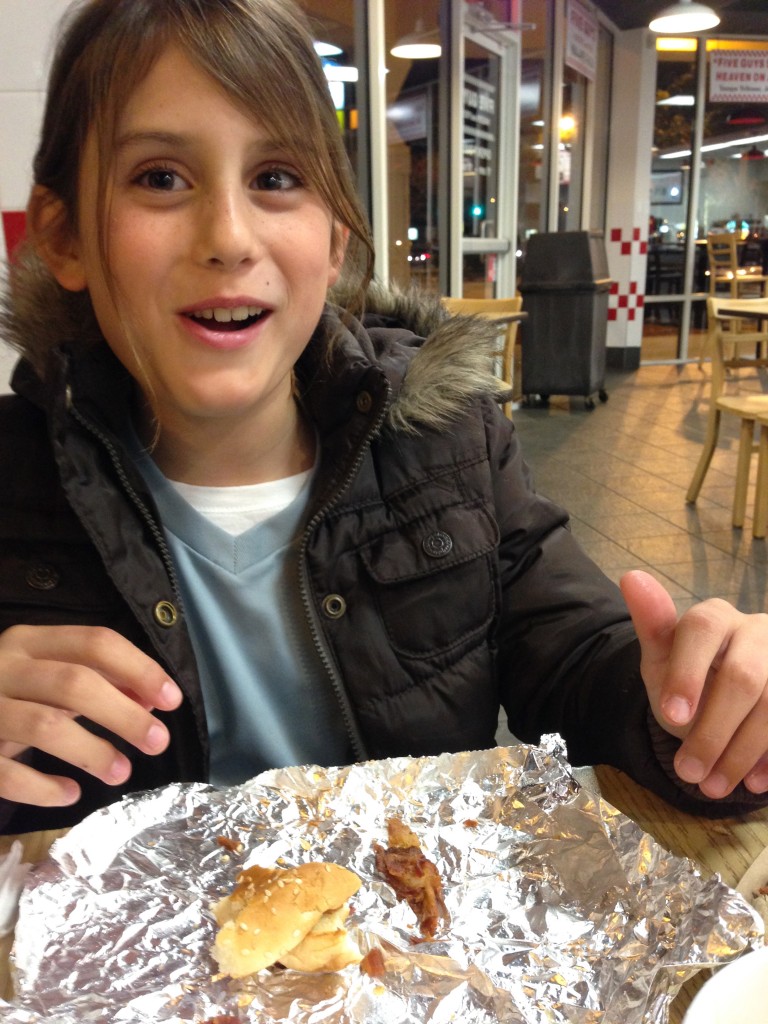 Eating in silence–except for what seemed to be a remix of a GN’R tune on way too high a volume–was a time for no agenda. No assignments. No reminders. No hastily-spelled or yelled-out instructions.

She’s been really quiet lately. And a little closed off. Not just during this meal; in general and for weeks. I dangled a single simple question over the table and the door cracked wide open. I ended up hearing about school situations and relationship stuff that’s been hiding underneath the surface, quietly niggling her, not having yet seen daylight or hit the ears of someone over ten. 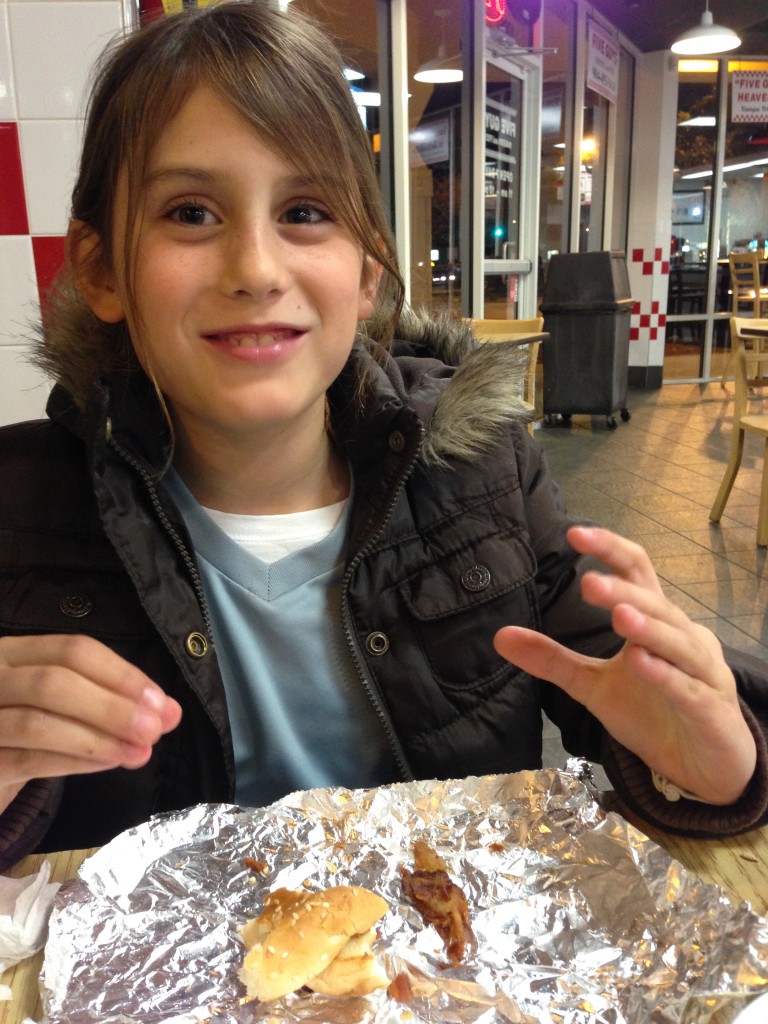 I forget that, with this one, the way to her heart is through her stomach. Maybe some dumb jokes too. 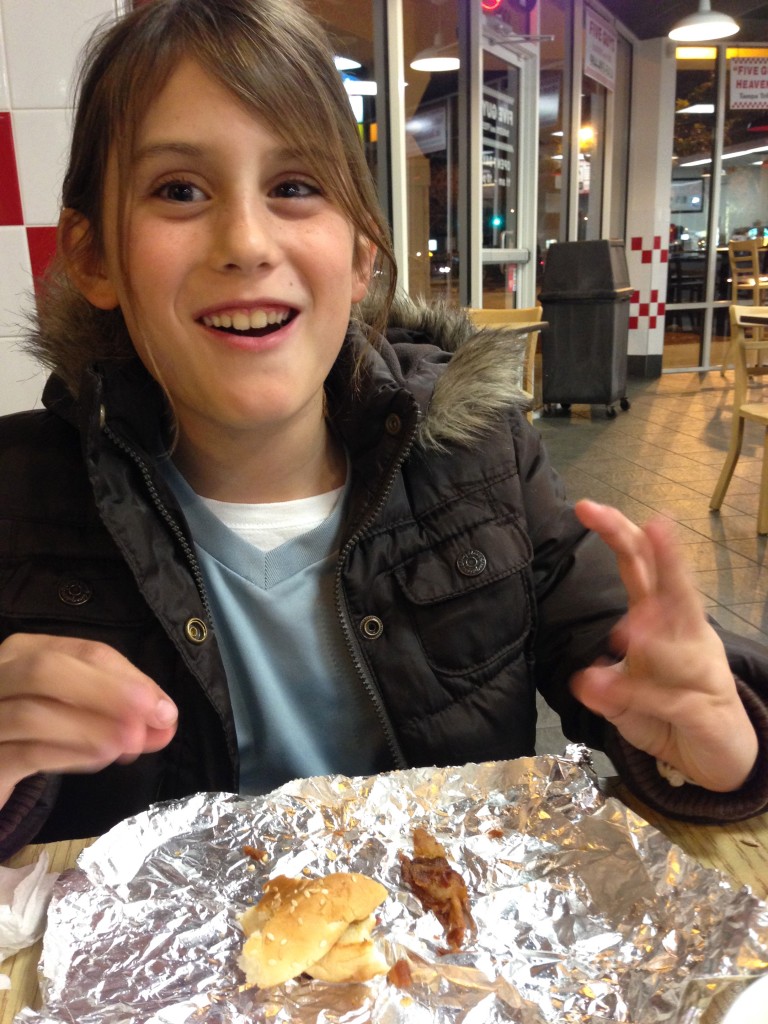 I let her sit next to me in the passenger seat on the way home which I’m pretty sure is illegal but, thankfully, I’m totally in with the guy I think’s about to become sheriff and I’m hoping my vote will keep me out of jail. Totally kidding. Gosh people. I haven’t done anything that would get me even close to jail. At least not in a good twenty–okay, thirty–years.

We spent the ride home commiserating over how we were stuffed like tics. (I skipped the bun but said yes to the double patties. I’m in my forties and not a marathon runner. What was I thinking?) We discussed other important current events such as how salty the fries were and how thirsty we were.

When things fell quiet I got lost in my thoughts, chastising myself for tossing out the new leaf I’d turned over at the start of the year. I certainly couldn’t be called legalistic, but the increase of kale and roasted beet salads has had me feeling more like an A instead of a C, as my friend Kathi would say. Disappointment and regret were pinging around my head like balls in a pinball machine because a night like this at my age can take several days to recover from.

This morning I grinned wide when she waltzed into the kitchen, still slow with sleep and dressed in polka-dotted pants. The sun had just begun to light up the inside and she said her mouth was still buzzing from last night’s salt.

“I woke up to swollen fingers,” I said and it was like we now shared this little secret, our  small but wonderful rebellion against health and a perfectly-behaved life. I told her I’d be her water-drinking partner today–her off at school and me here at home–explaining it would help us flush out the extra five thousand milligrams of sodium like pushing a small river through a stopped-up sink helps it flow freely again.

Any tinge of regret I’d had the night before evaporated in the light of her smile and I felt a warm fuzziness in the air between us that hadn’t been there the previous morning. Sometimes it’s the places we go when we get off track that show us where we were previously headed. Instead of a wasted interruption in a finely-tuned schedule, maybe it’s the pit stop or even an entire derailment which reveals we need a course correction altogether.

As I sit here on  my fifth glass of water, I’m so thankful for salty food and sweet conversation. Little did I know some burgers and a bagful of fries would help us push the Reset button. I didn’t even know how much we needed it.

If you enjoyed this, you may also like Not My Finest Parenting.

Sound of the Songbird
On Watch